The COSMO CONSULT group, one of the world's leading Microsoft Dynamics partners and provider of modern digital solutions and IT services for industrial, commercial and service companies, is once again a "growth champion” according to FOCUS magazine. The FOCUS initiative, carried out in cooperation with renowned data portal Statista, awards companies whose chiefly organic growth sets an example for the entire economy.

Dynamic growth is not a given for companies that have to hold their own in a demanding international market environment. This is especially true for technology-driven industries, who not only face local but also cross-border competition. At the same time, demographic developments and legal regulations are making economic conditions increasingly complex, which is why growth of just two percent is considered a boom in the established economies.

Once a year, FOCUS magazine looks for companies that are particularly successful in their market segment and whose growth is well above the macroeconomic average in this difficult environment. The most promising candidates from a total of just under 3.5 million companies are selected on the basis of their market presence, size and economic key figures. After another qualifying round and a detailed survey, FOCUS draws up a list of the 500 fastest-growing companies, which for the second time in a row this year includes the Microsoft Dynamics partner and digitalization expert COSMO CONSULT.

According to FOCUS, these so-called growth champions stand out not only for their business achievements, but also for their services to the national economy: "They provide an important stimulus for the economy and society as a whole, create new jobs and ensure economic growth." The emphasis is on their role as innovators in particular, where COSMO CONSULT Group stands out above the rest with its multi-award-winning commitment to the digitalization of business processes and adapting to modern technologies, for example in the Industry 4.0 environment.

Let us advise you!

A sound know-how in the field of future digital technologies is also the key to continued successful development for COSMO CONSULT. In addition to organic business growth, takeovers and collaboration also play an important role here. One example is last year's acquisition of one of the leading experts in mathematical models and algorithms for optimizing business processes. A COSMO CONSULT business unit was established through this merger, whose research and development findings have been instrumental in integrating modern AI technologies into the Microsoft Dynamics solution portfolio.

"Our growth in recent years confirms that we have found good answers to our customers' questions and needs," says Uwe Bergmann, CEO of the COSMO CONSULT Group. “We are living and working in times of great change. I’m referring above all to the modern digital technologies that are opening up completely new perspectives and revolutionizing working processes. Our goal is to make our customers the winners of this process of change. As the FOCUS growth champion, we are the living proof that you can advance your company's development thank to a digital strategy. We see it as our job is to share our knowledge and experience with customers and partners and to open the door to their successful digital future." 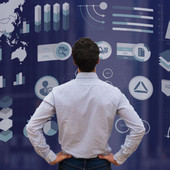 Would you like to know how you can fully digitalise your company? We will show you your digital potential.